The Dallas Demons Series is my first hockey romance series. All the books are designed to be read independently of one another, so if you want to start out of order, you can. But if you read them in order, you’ll see how things progress for characters in the older books in the series. Here are the books, listed from the first to the most recent:

2. The Definition of Icing (Dallas Demons #2) 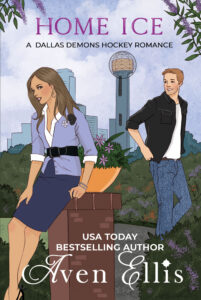 This book was previously published as Waiting for Prince Harry

Kylie Reed vowed she’d never pick up a man in a bar.

It’s one of her personal rules, after all.

So falling into a gorgeous ginger’s lap, tossing a glass of wine on him, and then hoping he asks for her number while in a bar would be a trifecta of wrong, right?

Organized, rule-loving, and cautious to a fault, Kylie Reed is waiting for the perfect moment to live her dreams—when she has a house, when she meets her husband, when she has been at her visual display job at a chic boutique a little while longer. All of her dreams are saved for later—as that seems to be a safer place than taking a risk to actually live them.

Yet Kylie finds all her rules bending when she falls into the lap of gorgeous Harrison Flynn, captain of the Dallas Demons hockey team. Harrison harbors his own fears for the future, ones he keeps close to the vest. He’s intrigued with the brown-eyed beauty who proceeds with caution, while she’s drawn to the sexy man who pushes boundaries and functions in chaos. The phrase opposites attract has never been truer as the chemistry between them is anything but polar from the second they meet…

While the attraction is hot, is that enough to make a relationship work? Can they face their fears for a future they both want? Will this relationship end before puck drop? Or will they find home ice together?

If you like swoony heroes, hilarious heroines, and a couple you can cheer for, you’ll want to escape into Home Ice. Can be read as a standalone and a happily ever after is guaranteed.

The Definition of Icing 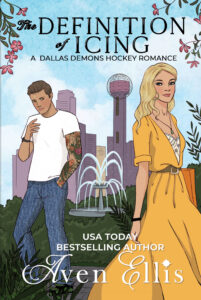 Kenley Hunter finally has everything sorted out. Fresh from studying chocolate making in Europe, she’s gambling everything on her new business, Confection Consultations.

All Kenley wants in life is people to take her seriously, to see the person on the inside rather than the blond beauty on the outside. While pursuing her passion of chocolate, Kenley discovered people seek her knowledge. They see past the exterior and fall for the chocolate delights in front of them.

So with work as her focus, Kenley is ready to start her career in Dallas. Men are out of her recipe, because she fears that once they get past her looks, they’ll be disappointed in what they find. Kenley decides she’s all about the chocolate now.

Because a chance meeting with new Dallas Demon hockey star Nate Johansson might change everything. Sent to Dallas in a blockbuster trade, Nate is somewhere he doesn’t want to be, for reasons that have caused him heartbreak on multiple levels. Nate knows he will never trust a woman again after what happened to him in Minnesota.

But when he meets a woman with an intriguing name and a passion for chocolate, Nate isn’t so sure about his theory. And he might just learn a definition of icing other than the one used in hockey with Kenley as his guide… 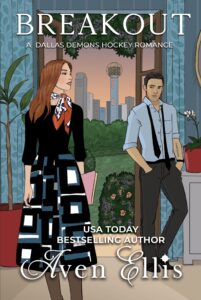 While Texas is known for loving football, Lexi Stewart has always been drawn to the ice. Hockey is her passion, and she wants nothing more than to pursue a career in video editing for the home network of the Dallas Demons hockey team.

Lexi has an editing job for a corporate account, but it’s not fulfilling. Nor is her dating life, despite having the so-called help of The One Online Dating Service. Lexi knows there has to be more for her—on both fronts. She’s ready to take the next step, but it doesn’t seem like it’s going to happen anytime soon.

Until a flying puck changes everything.

As Lexi shoots a Dallas Demons practice to hone her editing skills, a stray puck soars in her direction, and her whole life is turned upside down by the gorgeous man who pushes her out of harm’s way.

Niko Xenakis is the new Dallas Demons TV producer, and he’s looking to make his mark in his new role and hopefully work his way back to his hometown of Baltimore. But once he meets Lexi, he might just change his mind on what he wants for his future . . .

But the road to love is never easy, complicated by the fact that they both carry emotional baggage from the past in their hearts. Can these two breakout of the past to find love in the present? 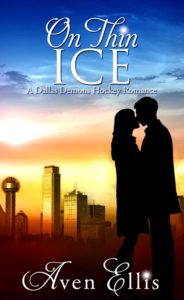 Holly Johansson knows some things in her life are certain after college graduation: 1.) It’s a long road to become a full-time author. 2.) She’ll need to work to pay her bills. 3.) And Dallas Demons superstar Matt Rhinelander will never return her feelings.

Holly knows her unrequited crush on the partying hockey player is ridiculous. There’s no way Matt would be attracted to a woman who prefers nights in watching TV or reading books when he’s known for his frequent bar hops and fast lifestyle. Obviously he would never see her as anything other than his teammate’s little sister.

Yet Holly is drawn to the other side of Matt—the man she knows has always been thoughtful and easy to talk to whenever she’s been alone with him. It is this Matt that fueled the crush Holly has on him. And she knows it will always be just that—a secret crush.

Because when Matt helps Holly through a crisis, her heart begins to believe that there might be feelings on his part, too. After a night of hard partying puts Matt in jeopardy with the Dallas Demons, can Holly be the one to save him? And when Matt admits he sees her as more than Nate Johansson’s sister, will it put both of them on thin ice? 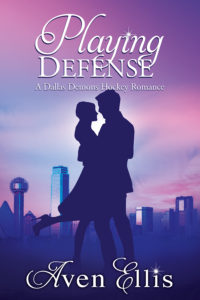 After a string of bad set-ups and boring dates, Reese Brannon is done with men. She’s focused on her job as a fitness model and blogger. Her life in the city is fun. She’s young. There’s no need to look for a man because she doesn’t want one. Especially when relationships usually end in heartbreak.

Jean-Pierre Rochat—known as JP— is done with women. All this Swiss hockey player has ever wanted is to fall in love, but his relationships never end with a happily ever after. Believing he’s always going to be dealt the friend card, JP is over it. If he’s going to be stuck in the friend zone, he’ll keep things casual for his new endgame.

But will one hot Dallas summer night change everything for Reese and JP?

Because when the two meet again when JP returns for hockey season, Reese finds her attraction to him hasn’t waned since their first meeting. Charming and intelligent, JP is different in all the right ways, but Reese realizes letting him in will make her vulnerable, something that terrifies her. JP never forgot Reese from their initial introduction last winter, and the sparks fly for him even more so the second time. But with Reese, his thoughts are anything but casual . . .

Can JP and Reese let their guards down to take a chance on love? Or will this simply be a game of playing defense?